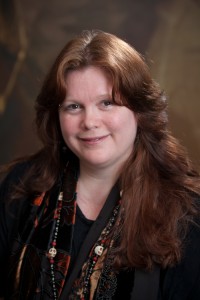 I’m Angel Leigh McCoy. Just call me Angel. It’s been my name ever since I was born Mom’s Christmas angel.

My, how the years go by in the blink of an eye! Truth is I’ve been a professional writer for twenty-some very odd years, living the dream, creating stories and characters in crazy worlds.

I soaked in the creative energies that surrounded me, and now I’m channeling that magic into Danika Dire (Games Omniverse), a story that I’ve been gearing up to tell since forever! We’re doing a novel, an interactive fiction game, a webcomic, and a puzzle-adventure video game! This team I’m on is wondrous. Some of the nicest people I’ve ever known, and I love love love working with them. Keep one eye on us over the next few years because when Danika Dire’s story gets told, you won’t want to miss a moment of it!

Before I get ahead of myself, let’s go back to the beginning. I’m a corn-fed Midwestern girl, born and raised in Central Illinois where there wasn’t much to do besides think about boys, read, and write. I started my first novel in 6th grade. It was about a woman whose sister had disappeared, and she was going to sneak into an old mansion as the governess to find out why. Yeah, it had been done, but what can I say? I was eleven years old! It was right about that time that I won first place in a state-wide essay contest and coined the phrase, “Give a Hoot, Don’t Pollute.” Most people–okay, no one knows that I was the first to come up with that, except me and now you. Don’t tell anyone. They won’t believe you.

After that, I was a goner. At the risk of aging myself, we didn’t have computers back in the early days. I had to type and retype every single page… after every single revision. Frankly, it’s a wonder anything ever got published before electronic typewriters. I was one of the first in line to buy a computer, peering in the windows at the University of Illinois’ computer labs, sneaking in to log in via Kermit. But, I digress.

So I’ve been writing since dinosaurs walked the Earth. Writing, editing, and playing games. My first ever computer game: “Pong.” No lie.

Eventually, my peanut butter got into my jelly. Nom. I made myself a writing-and-games sandwich, combining the two, beginning with table-top RPGs, then evolving into video games. From 2007 to 2017, I was a writer/narrative designer on Guild Wars 2.

Today, I’m the founder and Creative Director at my favorite game company Games Omniverse. We’re working on a puzzle-adventure game in the Modern Fantasy genre. I get to be the primary story architect and writer on the project.

I got my first taste of online and multiplayer storytelling in the late 80s when I discovered MUSHes and learned MUSH code to guide stories for dozens of players. Later, in the 90s, I became the first Eastern Regional Storyteller for the Camarilla, guiding stories for thousands of players in five states, as well as supporting the national and international stories in the game.

Throughout the 90s, I did freelance game, story, and character design for table-top games such as Vampire: the Masquerade, Changeling: the Dreaming, Hunter: the Reckoning, Millennium’s End, Mage, Earthdawn, and World of Necroscope. I was the first female game designer on the Dungeons & Dragons team at Wizards of the Coast, and over the course of five years at Microsoft Game Studios, I helped ship PC titles such as Zoo Tycoon 2, Rise of Nations, Microsoft Flight Simulator X, Shadowrun, Crimson Skies, Conker, Blinx, Viva Pinata, Perfect Dark Zero, and many others. Once upon a time, I was an official game correspondent known as Wireless Angel, at Xbox.com.

Time sure flies when you’re having fun.