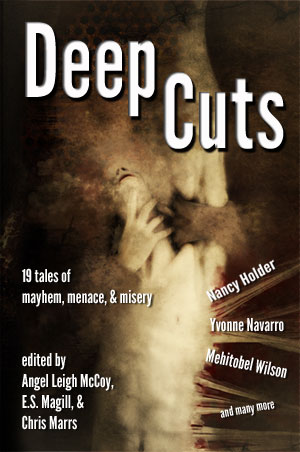 Order the paperback edition online.
Get the Kindle edition.

Over the course of several horror conventions, E.S. Magill, Chris Marrs, and I engaged in a discussion about doing a horror anthology that honored female horror writers. This discussion gained momentum, and before long, at Killercon in Las Vegas, we’d mapped out a plan. We knew from early on that we didn’t want this to be a “chick’s horror anthology.” We wanted it to be dark, intense, horrifice and for men and woman, but we were also adamant about bringing amazing female horror writers into the light. So, we found a work-around.

We asked all submitters (male and female) to write a 150-word recommendation for a short horror story written by a woman. We got some amazing recommendations, and my own to-read list tripled! We chose 16 of the stories from the slush pile, along with their accompanying recommendations, but we also printed the best of the other recommendations we received as an addendum in the book.

In addition, each of us editors invited one woman writer whose writing we admire to submit a story to us. E.S. chose Nancy Holder’s “Crash Cart,” a beautiful and horrifying story that won’t ever leave you once you’ve read it. Chris chose Yvonne Navarro’s “Santa Alma,” a haunting story with amazing characterization and description that evokes another era and will give you shivers as you read it. I chose Mehitobel Wilson’s “The Remains,” a creeping story that evolves into much more than you expect as you read it and that will leave you thinking through all its ramifications long after you put the book down. All three of these stories are in the book, along with 16 others that will surprise, shock, and shiver you up.

The introduction to the book was written by well-known Halloween scholar and horror writer, Lisa Morton. She pulls no punches in it, taking a strong feminist stance and giving plenty of intelligent reasons to think hard about what she’s saying about the challenges women horror writers have and still do overcome.