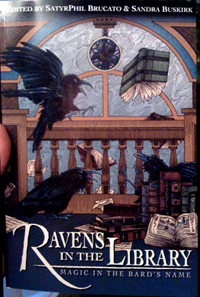 The editors of this anthology (Phil Brucato & Sandra Buskirk) contacted me and let me know that they were doing a benefit anthology to help a talented young musician pay a pile of medical bills she had accrued.

I knew instantly, I wanted to write a story for it. First, I had worked with Phil on many game projects in the past, and I was thrilled to work with him again. Second, once I started investigating S.J. Tucker, the musician, I learned that she had the biggest heart and coolest approach to her music and fans. I fell in love with her from a distance, and knowing how hard it is to pay medical bills when you have no insurance, I determined to write a story for her that would be uplifting and appropriate to the situation.

I wrote “Pipsqueak” in a week and submitted it. Phil & Sandi came back with some suggestions that made the story all the better. I have always adored Phil’s mind. He’s been one of my most cherished editors. I incorporated his changes and sent the story back to him. He called me immediately after re-reading it with Sandi, and let me know he would accept it for the anthology. He said some other very sweet and flattering things about it too.

“Pipsqueak” takes place in Reality. In my version of Reality, the walls between dimensions have thinned. Some people who are especially attuned (often because they have extra-dimensional blood) can see the creatures and beings who slip through from beyond. Those in-the-know began calling them “schizophrenics” because, more often than not, this is the label they’re given by normal society. When they insist they can see and hear monsters, blue-skinned cats that talk, and miniature dragons, many of these schizophrenics end up in mental health facilities, some for the rest of their lives.

Seventeen-year-old Pip is one of the ones who managed to escape the facility where she’d been committed. She lives on the street, alone but for a handful of pixies who watch her back. She gets by day-to-day, as best she can. She’s tough and resourceful.

As her story begins, she’s being chased by a ravenous black dog that only she can see. Through a tumble of events, she meets people who will have a lasting impact on her life, and who will eventually become her family.

No one ever believed Pip when she told them about the black dog, so she’d stopped trying. Apparently, she was the only one who could see it. It never left footprints, drool or hair in its wake, so Pip had never convinced anyone that it truly existed.

Pip got to her feet.

The pixies had returned, having fled at first sight of the black dog. They were sniffing around her wounded elbow. She shooed them, but they didn’t give up. Their dragonfly wings hummed, and their chameleon tails curled and uncurled as they shoved each other out of the way. One got close enough for a taste and came away with a smudge of red on his nose and lips.

“Dream!” Pip scolded it by the name she’d given it. She had had to name all the pixies, since they’d refused to tell her their real names. She had chosen a set of names she’d read once-upon-a-time, in a comic book. She waved her hand to shoo the tiny creatures again.

“Did you say something?” asked the guy from his folding chair.

He moved his guitar to one side and reached into a purple gym bag. “Better move over here or one of these pedestrian assholes will knock you down again,” he said.

Pip edged to where she could stand with her back against the wall. She felt safer there anyway. Her elbow throbbed. Several of the pixies were clinging to her nylon sleeve with fingers and toes—upside down, right-side up. They were playing in the drying line of blood, painting each others’ faces and naked bodies with it.