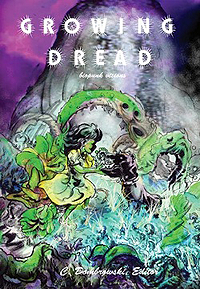 Nathan Crowder of Timid Pirate Publishing contacted me and said, “Biopunk.” I was immediately intrigued and knew I had to write a story for submission to his upcoming anthology. I stewed on it for a long time and, finally, a story idea came to me. I wrote “The God Bloom” specifically for this anthology, which makes me especially delighted that it was chosen for inclusion.

Mother Nature herself is a force to be reckoned with, and I for one don’t find it terribly unbelievable that she could be the instrument of our extinction on this planet. We have abused her for a long time and believe ourselves above reproach because we’re humans. So, what if, one day, Mother Nature had had enough? What if she decided it was time to make her presence known. This is that story.

…the mayor of Gulfport has scheduled a press conference for 10:30 this morning. We’ll cover it live. After today’s events and the chaos that has resulted, Mayor—

A voice came out of nowhere. “Excuse me.”

At first, Bert thought maybe he’d accidentally changed waves on himself, but the drone continued on, and the other voice was superimposed over it.

The other voice belonged to a tall, slim teen, no older than eighteen, with a black Mohawk and piercings in her nose and cheek. She was dressed retro-punk, her skinny legs sheathed in tight-fitting jeans. She had on an antique Black Flag t-shirt worn thin and held together with safety pins; she had army boots on her feet; and, despite the heat, she’d put on a ragged jean jacket covered with studs and ink doodles.

Bert straightened and nodded, “That’d be me.”

“I need you to take me to Sigsbee Laboratory.” The punk girl pulled a gun from her pocket. “Right now.”

Bert’s mind skittered on the words, his attention focusing on the gun, trying to figure out what it meant.

“Look, man. I’m not joking. I need to get the fuck out there, as quick as you can take me.” The girl’s eyes were a dark shade of green. They held purpose and determination, not the slightest sign of fear or anxiety.

Bert nodded. “Sure. No problem, but I got kids in the sub right now. Let me get them out first, and then I’ll take you.”

“No time,” said the girl. “We gotta leave right now. We’ll all go together.”