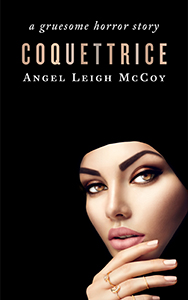 When a medical intern stalks his own girlfriend to find out if she’s cheating on him, he stumbles into an ages-old battle between a Catholic priest and a murderous monster. Can he save his future family from becoming the victims of his jealousy?

The title of the story is a play on words, combining “cockatrice” (a mythical monster) with the French “coquette,” which means “flirtatious.”

The seeds for this story were two mythological creatures: a basilisk and a cockatrice. Their myths go back before Christ, thousands of years.

I took liberties with the myth and twisted it to my own cruel whim. I capitalized Basilisk’s name and made him a demon. Then I proceeded to further warp the myth and give him a servant called a cockatrice.

This story alternates between points of view: the cockatrice (a cold-blooded killer), William (a medical intern), and a priest (a Catholic knight). The lives of these three beings come together on a foul Halloween when nothing goes as planned, and yet family wins out in the end.

The German shepherd growled and bared its teeth, so the cockatrice twisted its head off. Afterward, the monster looked up at the house, holding the decapitation by an ear. Blood and other fluids drained from the dog’s neck onto the lawn. Stepping over the twitching body, the cockatrice rounded the corner of the house and peered through a window. It purred deep in its throat at what it saw. It cut through the screen with one, sharp claw and crawled inside. Television noise came from another room. The cockatrice quietly shut the nursery door. It walked to the crib and held up the dog’s head for approval, bobbing it above the railing like a puppet with a ribbon tongue and blank, button eyes. The child giggled. For several minutes, the cockatrice amused itself, making the baby laugh. Predatory peek-a-boo pleased it for awhile, but not forever. The sour-sweet aroma of infant-meat made its mouth water.

1999. I was making plans to attend the World Horror Convention when I saw that they were hosting a short story contest. I wrote “Coquettrice” over the course of several weeks and submitted it at the last minute.

At the time, I was making my initial attempt to focus on fiction. Unfortunately, the timing was off since I was also planning my move to Seattle. Ten years later, I’m finally getting back around to my fiction.

That World Horror Con turned out to be rather monumental for me. It gave me my first taste of what it was like to be a professional fiction writer.

Of course, I went to the awards announcements. There were so many people in the audience. My heart was hammering. Mr. Neil Gaiman got up on stage, along with the other guests who had judged the final stage of the contest.

I shook various hands, though the only one I really remember is shaking Neil Gaiman’s. He smiled and congratulated me. I managed NOT to puke on his shoes. Thank God, I wasn’t expected to actually say anything.

For weeks, I was high.

Then, it took ten years before I found a market for this vile story, because vile it is.

Others in the VILE THINGS Anthology