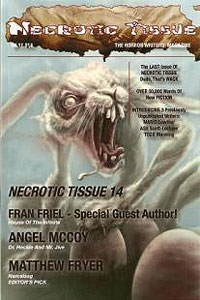 Order a copy for $10 at the Necrotic Tissue website, on Amazon US, Amazon UK, or Amazon Canada.

I became fascinated with the idea of horror and humor combined when I was trying to get a story into the HWA’s BLOOD LITE series of anthologies. I researched how to write humor, listened to several podcasts on the subject, and even read a couple books. Writing humor does not come naturally to me. I start putting words on paper, and it gets serious and dark fairly quickly.

So, this story was a challenge, not only because humor isn’t my forté, but also because I wanted to have the main character, Heck, suck in the beginning, then be awesome at the end. In order to do this, I had to figure out the difference between good and bad humor, then present it in the story. I hope I succeeded, but ultimately, you will be the judge.

Bartholomew “Heck” Heckle is an aging stand-up comedian working a run-down comedy club. His career is not only on the rocks, it’s watered down with no twist. He has one last show to impress his boss or he’s through. Between sets, his old mentor arrives with a gift for him, a potion handed down by timeless performers, and one last bit of advice that will change Heck’s life forever. But, there’s a price to pay for greatness: you have to weed your audience.

Mack, the master of ceremonies, owner of Tickles comedy club, was waiting outside Bartholomew Heckle’s dressing room. His mustache drooped past his chin, his painted eyes held spooky intensity, and his candied lips curled into less than a smile. He shook his head.

“Heck, Heck, Heck.” Mack’s wattle jiggled. He tugged on his tuxedo vest, pulling it back down over his gut. “You and me, we gotta talk.”

“Yeah, yeah,” Heckle said. “I know I ain’t been killin’ lately, Mack. It’s just a fuckin’ dry spell. Jokes are like that, man. Fickle bitches. One minute they love ya, and the next, they’re as cold as dead fish.” He opened the door to the dressing room and stepped inside. “Thing is, they always bounce back, eventually.”

Mack stationed himself in the doorway, one hand propped on the doorframe, the other on a hip, à la Mae West. “You know what, baby. In my experience, if your bitches ain’t putting out, you don’t wait for them to get in the mood. You either slap them into shape, or you find new bitches.”

Mack sashayed up close and put his hand on Heckle’s shoulder. “I don’t wanna be a hard-ass or nothing. I like you, Heck. I do.” He squeezed. “You got to understand that if you hurt my business, you’re hurtin’ me. I know you don’t wanna do that. You got a good heart. That’s why I gotta say what I gotta say.”

Mack gave the shoulder a shake. “You want a free ride, go stand on a street corner and put out a hat. You wanna keep workin’ here, you better find something funny in those old bones of yours. Got it?”

“You’re runnin’ out of forgiveness.” Mack turned away.

Heckle threaded a path through the backstage chaos, turning this way and that to avoid ropes, props, and strippers. He wanted a cigarette, but it was too late. He was due on stage in just a few minutes.