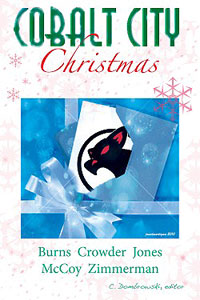 When Nathan Crowder told me about the Christmas themed anthology he planned to do, I was excited. I had never written a superhero story before this one, and my writerly whiskers began twitching with anticipating.

I was immediately struck by the double entendre in the word “nutcracker,” especially as it related to an ass-whooping superhero. The thought alone of breathing life into Nutcracker was enough to get me writing immediately. My mind filled with stories.

I started with the characters on this one. I knew Nutcracker had to have a late crime-fighting partner named Ballerina. At the start of the story, Nutcracker is visiting her grave.

Other writers in the anthology chose characters from Nathan’s books, but I struck out on my own, and injected a motley group of superheroes called the Nasty Brigade into Cobalt City. They’re led by Nasty Girl, a woman with a gorgeous face inside the tatters and stank of a street person. She smells like the street. On a good day, that means she smells like exhaust. Other members of the Nasty Brigade include DNA Man (a superhero carrying HIV), Miss Creant (a cleptomaniac) and the X (who’s just plain strange).

In any superhero story, there has to be a nemesis, and what better one for Nutcracker than Mouse. He ain’t royalty, but he’s a royal pain in the ass. Nutcracker and Mouse have a history: they both loved Ballerina.

Nutcracker bent over the tombstone. The only name on it was: Ballerina. She had maintained her anonymity to the very end. Even Nutcracker didn’t know her real name, but that didn’t matter to him. He had loved the tiny dancer more than anything in the world.

Ballerina had put more than one serial killer into oblivion with a chassé, grand battement, and plié combination. She liked to say she had killer attitude. As partners against crime, she and Nutcracker had taken down some of Cobalt City’s worst masterminds.

Nutcracker had never managed to get the image of her body—broken and bleeding, sprawled on the street—out of his mind. She had looked like an angel fallen from Heaven, or a fairytale swan caught in the wrong reality. The rain, the dirt, and the blood stain had swallowed her up, overcoming the pure white of her leotard and flattening her tutu. Her hair had come loose from her bun and was flowing in the stream along the gutter, as if she herself were being flushed away. Nutcracker had carried the sight with him ever since.

The wind and sky held the promise of snow. Lafayette Cemetery was a watercolor in shades of gray, with its rows of headstones commemorating the deaths of Cobalt City’s greatest heroes. The cold seeped into Nutcracker’s joints and made his eyes blurry with wind-whipped moisture.

DNA Man approached slowly, making as much noise as possible. Before he was within striking distance, he said, “Merry Christmas, Nut.”

Other authors in the anthology: