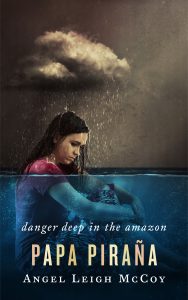 I was invited to submit to this anthology, and from the beginning I knew I wanted to write a story good enough to live up to Jennifer Brozek’s standards. She has rejected others of my stories on several occasions, and so I was motivated to give her something extra special. The theme of the anthology is were-creatures other than werewolves. A writer could go in any direction with that, and I felt the paralysis of having too many choices.

Then, I was having dinner one evening with a Brazilian friend, and I got to wondering if there were any folk tales from the Amazon that might provide fodder for me. Indeed, there was one in particular that struck my fancy. In the end, I chose a location in Peru, not in Brazil, but still upon the Amazon River. I did extensive research and reading for this story, as much for my own pleasure as to buff up the background.

I’m really proud of how this story turned out, and the fact that Jennifer Brozek’s keen editorial eye approved of it makes me all the happier.

An American doctor stationed in Iquitos, Peru, does what she can to help the poor people living in the floating slum. Elements of the culture are overwhelming and horrifying to her, and she feels helpless as she watches her patients do the dangerous things that their ancestors have been doing for many generations. Only the magic of the Amazon River and the people who live along its banks can help her understand the life to which she is called.

“Señorita Doctor, I need you,” said Señor Lopez in Spanish, “to confirm that my daughter is still a virgin.” He stood beside the examination table, flies dancing around him, his oily black hair reflecting the overhead light.

I nodded, stalling, while I searched my mind for an appropriate response. Lopez already had her lying on the table. I looked from him to her.

Her name was Kachá. She was fifteen and a beautiful aboriginal girl, bronze-skinned, black-haired, and dark-eyed. She wouldn’t look at me, but instead turned her face aside. Her cheeks and neck raged where they had broken out in a flush.

I chewed the inside of my lip and finally said with my gringo Spanish, “Why do you need to know this, señor?”

He replied, matter-of-factly, “Because she is worth more money if she is pure.”

The city of Iquitos nestled at the foot of the Andes Mountains, so deep in the Amazonian rainforest that you couldn’t reach it except by plane or river boat. It bustled and put up a brave front, pretending to be modern and sophisticated. Yet, once you peeled back the top layer, you uncovered the old ways and belief systems that were always the nature of the Amazon River basin. This included arranged marriage and the exchange of a daughter for a dowry.