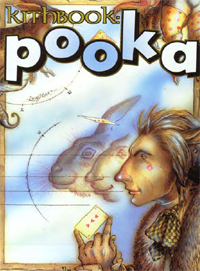 My all-time favorite White Wolf World of Darkness game was first-edition Changeling. Mr. Ian Lemke gave me a break and let me write in Immortal Eyes: Shadows on the Hill, a supplement about changelings in Hawaii. After that, I was hooked.

Kithbook: Pooka contains my short story “Lion and the Heart of Wonder,” which I wrote using the style of the Brothers Grimm.

The book was a solo project for White Wolf–as much as any shared world project can be called “solo.” As a contract writer, working for a game company, you craft your words into something as beautiful as you can make them, and then you turn them over to editors and marketers and maybe even janitors who will pick it apart, critique it, and possibly change it.

I was delighted when the grand majority of what I wrote for the Pooka Kithbook remained in tact, primarily because I went out on more than one proverbial limb. I wanted pooka that had an edge. I wanted to allow people to play dark and terrifying pooka, and I wanted to build the pooka mythology from the ground up again so that it would spark imaginations.

Insect pooka. Now that was something I thought might get cut, but blessings on the editors, it didn’t. I was ready to fight for them tooth and nail, if I had to, but no such fight was necessary. Butterfly pooka, black widow pooka, and grasshopper pooka all sparked my imagination.

As early as the Paleolithic Age, humans passed down lore to their young and reasoned out their own explanations for the world’s mysteries. They also produced the first art and the first dreams. Deep in caves, hidden and protected, they painted animals, hoping to gain some magical control over the beasts they hunted. Their hopes and dreams produced the pooka.

In the foothills of the Pyrénées, in a cavern called Les Trois Frères, a cave painting shows a controversial figure. This figure–a man dressed in the skin of a horse or a wolf with the antlers of a deer–is said to be a prehistoric shaman. Changeling scholars, on the other hand, say this is the first record of a pooka among human society. They state that the painting, called “The Sorcerer,” is in actuality a representation of a pooka, shown as half-man and half-stag.

By the Neolithic Age, people developed agriculture and domesticated certain animals. Agricultural surplus, helped along by ox-drawn plows, allowed humans the leisure time to dream and to aspire to more. It also freed some members of the community to become artists and craftsmen rather than hunters and farmers. Many of these early civilizations, like their ancestors before them, developed myths and stories of magic. Most of these myths featured animals. The pooka claim to have sprung from those myths, though they were not like the pooka we know today.

Vibrant and primitive creatures, they instilled fear and awe in humans. The elusive nature of these ancient faeries makes it very difficult today to surmise their actual characteristics. No pooka known has ever retained remembrance of those days and pooka are notoriously bad about keeping records or journals. Sumerian mythology, however, depicts animals as demons and monsters to be conquered. Pooka had not yet evolved to a place of reverence among these ancient peoples. Their predatory natures made them humankind’s enemy, dangerous and rabid. It wasn’t until much later that the dreams that created pooka began to shift into something more positive and less primitive.