Lisa Morton was one of the early Wily Writers and a definite score for the ezine. She has inspiring talent across numerous fields, including writing short fiction. She contributed “Sane Reaction” to our repertoire of podcasts. It’s a horror story about a couple who meet in a bar and find they have more in common than they ever expected. This story was also produced as a stage play, and I wish I’d been around to see it. Listen to the podcast.

To celebrate the launch of Night-Mantled and the Wily Writers “Best of” series, I interviewed the authors. Here are Lisa’s responses:

I started as a screenwriter, but I really love short stories, both reading and writing. For my particular genre of choice – horror – I also think the short story is the perfect form. Horror depends on either the creation and development of mood, sustaining tension, or the short, sharp shock – all devices which just naturally work better in a shorter form.

What’s the one thing you want people to know about your story in Night-Mantled?

It’s a piece that has special personal meaning to me on two levels: 1) It started as a play and became very successful, garnering me my first real taste of rave reviews and artistic success; and 2) it was my first published work of horror fiction. “Sane Reaction” will always have a special little dark corner in my heart.

When and how do you write?

I have what I’ve come to realize is an atypical process: I don’t write everyday, and I don’t set myself goals or deadlines (unless a publisher has mandated one, of course!). But I’m working ALL THE TIME. I go over stories in my head for weeks, throughout the day and into the night, rewriting them mentally until I’ve committed them to memory, and I’m happy with them. Then I’ll sit down and essentially just transcribe. So although it seems like the process is short (because typing it up usually takes an hour or two), it’s actually probably taken me longer than it takes most writers.

I’m also a laptop addict. I love to sprawl on the couch with my beloved little machine and a cup of tea, and lose myself. Time of day doesn’t matter to me.

Do you have an area of expertise?

I’m occasionally amused to realize that I’ve become one of the world’s foremost experts on Halloween (the holiday, not the movies). It really was not ever a goal; obviously I’ve always loved the day, but I never set out to become an expert on it. It really came about kind of by accident: Back in the early ’00s, I’d just finished a film book with the publisher McFarland, and they asked if I’d like to do something else. I’d been collecting vintage Halloween books for a while, saw that McFarland had recently published THE CHRISTMAS ENCYCLOPEDIA, and suggested THE HALLOWEEN ENCYCLOPEDIA. Of course, silly me – my little vintage books ended up providing about 1/20th of the research I needed! It took two years to write that first Halloween book, and I just ended six months on updating it to a 2nd edition. But it’s been great fun to become involved with other Halloween experts, most of whom are delightful people, and to share my knowledge on video specials and interviews and the like, so I certainly don’t regret the amount of time I’ve put into it.

I’m definitely a city girl, currently residing in the San Fernando Valley just a few minutes from downtown L.A.. I was born and raised in Southern California, and I can’t imagine living anywhere else. I have a friend who lives in the hills about an hour northeast and all my friends think it’s idyllic, but it would kill me to live there. I need the thrum of the city around me. I love the energy and the convenience and the culture mix and all the different kinds of people you interact with throughout the day.

Do you have a day job? What is it and what’s it like? How does it impact your writing?

I have a day job I love. I’m a bookseller, working at one of the last used bookstores in L.A. (the Iliad Bookshop). I’ve loved books my whole life, and in fact one of my first jobs (at 14) was working summers in the college bookstore my mom managed, so it runs in the family. I’ve worked in and managed both new and used bookstores, but I left the former when the company (Waldenbooks) held a management seminar in which they actually told us that there should be no difference between selling a book and a bar of soap, and that if we were here because we loved books we should get out (I handed in my resignation at the lunch break for the seminar and didn’t even stay for the rest).

Working in a used bookstore (or at least, working in THIS used bookstore!) isn’t what most people think. We don’t sit around and read all day, or discuss literature for hours. Our business is booming, and it’s a run-run-run kind of job now. I spend eight hours a day running to answer customer questions, lifting heavy (and often dirty) boxes of books, and climbing ladders. It’s often so busy that it can take me an hour just to answer an e-mail. But we have a constant influx of amazing books coming in by the hour, and we still get a few minutes here and there to talk to other people who love books. I recently found out, for example, that Guillermo del Toro and I share a mutual love for the works of Theodore Sturgeon. The artist Bernie Wrightson was in yesterday, and we talked about a children’s book illustrator (Holling C. Hollings) we both loved. It can be exhausting, but I wouldn’t trade it for anything.

Writers spend long hours alone. Does this bother you, and how do you overcome it, if so?

Yes, it does. I found out just how much back in the early ’90s, when I’d just finished a film that paid me very well and I had enough money to live on for a while, so I decided to try being a full-time writer. And it turned out that I did not deal well AT ALL with it. I tried to fill my days with writing and personal projects, but the confinement and lack of people around me drove me stir crazy; I was actually getting a weird tunnel vision thing happening whenever I went outside. After a year of that I stumbled across the “Help Wanted” sign at Iliad, and I remember friends urging me to take the job (because I knew if I applied I’d be hired). Thank God I listened to their fabulous advice! Since then, I’ve had a few screenwriting gigs come up that wanted me away from the store, but I’ve always demanded workarounds; on one daily kids show, I even had a fake desk I was never at in the production offices. Iliad saved my life, and I’ll pretty much have to drop dead before I leave it.

What do you think of the trend toward e-books and away from paper books?

I frankly think it’s overhyped. In the long run, e-books are going to settle in comfortably beside their sibling paper books, not kill them and take their place. 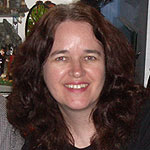 Lisa Morton is a screenwriter, reviewer, and the author of four nonfiction books, including the forthcoming Savage Detours: The Life and Work of Ann Savage.

Her short fiction has appeared in nearly 40 books and magazines, most recently Unspeakable Horror: From the Shadows of the Closet, Midnight Walk, and Cemetery Dance magazine.

She won the 2006 Bram Stoker Award for Short Fiction and the 2008 Bram Stoker Award for Nonfiction (for A Hallowe’en Anthology: Literary and Historical Writings Over the Centuries). Her first novella, The Lucid Dreaming, is forthcoming in 2009 from Bad Moon Books, and her first novel, The Castle of Los Angeles, will be published in 2009 by Gray Friar Press (with an introduction by Gary A. Braunbeck). She lives in North Hollywood, and can be found online at http://www.lisamorton.com.