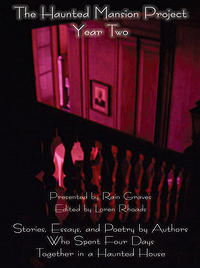 In the fall of 2012, seventeen horror writers and artists met in Northern California to spend four days together in a haunted mansion. Ten of them were survivors of the original Haunted Mansion Writers Retreat; the rest were virgins who encountered the house and its denizens for the first time. Joining them was the group of paranormal investigators who had recorded a plethora of EVPs as well as anomalous lights and ominous shadows in the mansion in 2010. This anthology collects short stories and poetry-as well as real impressions and investigative conclusions-inspired by that long weekend. Contributors include Nicole Boscia, S.G. Browne, Christian Colvin, Alexa deMonterice, Fran Friel, Kristin Galvin, William Gilchrist, Sèphera Girón, Stacey Graham, Rain Graves, E.S. Magill, Chris Marrs, Rena Mason, Angel Leigh McCoy, Lisa Morton, Yvonne Navarro, Weston Ochse, Kim Richards, Loren Rhoads, Kay Sundstrom, Dan Weidman, and Steve Weidman.

Did I see ghosts? No. But a few were definitely dredged up from people’s pasts and the darkest recesses of their minds. It was a perfect writing retreat.

I set out to write a depiction of what it must be like for the ghosts of the house, beyond the veil, watching as we arrived so full of life and happiness. It went darker from there.

I’m a mother, not a murderer. I don’t belong here in this uneasy world of shadows and cobwebs. I can never rest. That’s why I’m always the first to hear the guests arrive, their shuffling, their dissonance, and their squeals. They move in silhouette against a shimmering backdrop of sorrow because they don’t belong here either.

I have to warn the others. Maybe this time, it’ll be different.

Ryan is the easiest. He’s never hurt me. I go to his bedroom on the third floor and find him standing at the window, watching the moon rise among the giant evergreen trees. He’s a small man, hunched and shriveled both inside and out.

I stop in the doorway, and my reflection appears in the window just beyond his shoulder, a pale circle of worry in a frame of weedy curls.

“Ryan. Did you hear me? The guests have arrived.”

A door downstairs slams, causing the window pane to rattle.

I jump and glance around.

Ryan doesn’t react; he just stares…out into the descending darkness.

One day soon, when the moon is in the right phase, he’ll leave his post to walk staunchly into his invalid mother’s bedroom. He’ll put a pillow over her face until she lies still. Then, he’ll return to his window, open it, and climb over the sill. He’ll leap out onto the spikes of the iron fence below.