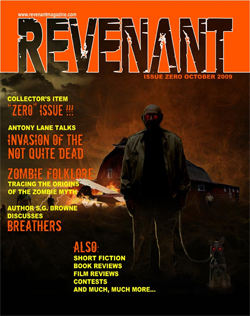 Face it. In 2009, zombies were hot. Everyone had a zombie story, except me, and I was feeling more than a little left out. I was a zombie aficionado, after all. I knew what to do to survive in the event of a zombie attack. I’d practiced my killing shots in Dead Rising, Left 4 Dead, and various other zombie Xbox and computer games. I was a pro. And yet, I had never written a zombie story.

I saw the call for submissions at Revenant Magazine, a fired-up new magazine devoted to our brain-challenged friends, and viewed it as my chance to jump on the shambling bandwagon.

Zombies have rules, you know? It’s not good to break those rules. People notice and get mad at you. Furthermore, there are so many zombie stories out there, it’s difficult to come up with a new and interesting twist on the damn things. I gave it a lot of thought, and followed the zombie invasion to its ultimate conclusion. I asked myself, “What, Angel, do you think would happen if it got down to the point where there was only one zombie left?”

My imagination went “Ooh!” And, I was off and… lurching.

Soldiers had cordoned off a perimeter surrounding the zombie. I could see it writhing on the ground, chains around its ankles. People crowded in to watch. They looked down from second-story windows.

I threaded my way to the front of the onlookers and started taking pictures. When I looked up, three soldiers were converging on me. I pushed back into the crowd and hid the camera in my clothes. I slipped into an alley, and blended into a group of workers. I barely escaped my pursuers in the smog.

That was the day I took the once-famous photo, popularly known as “The Linfen Monster Picture.” It made the rounds on the Internet and in emails.

Later, I encountered military response teams at all the sites. Government agencies dropped cloaks of silence around the events. They warned me, in no uncertain terms, that I’d suffer grave—even lethal—consequences if I spoke to the local media about what I’d seen. In some countries, they confiscated my cameras and ransacked my hotel rooms.